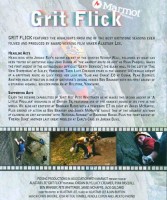 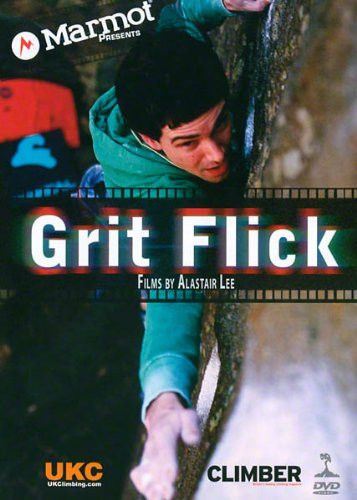 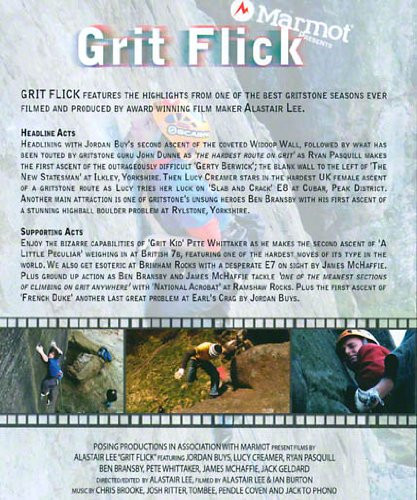 Grit Flick - one of the best gritstone seasons ever filmed!

Headlining with Jordan Buy's second ascent of the coveted Widdop Wall, followed by what has been touted by gritstone guru John Dunne as 'the hardest route on grit' as Ryan Pasquill makes the first ascent of the outrageously difficult 'Gerty Berwick'; the blank wall to the left of 'The New Statesman' at Ilkley, Yorkshire. Then Lucy Creamer stars in the hardest UK female ascent of a gritstone route as Lucy tries her luck on 'Slab and Crack' E8 at Cubar, Peak District. Another main attraction is one of gritstone's unsung heroes Ben Bransby with his first ascent of a stunning highball boulder problem at Rylstone, Yorkshire.

Enjoy the bizarre capabilities of 'Grit Kid' Pete Whittaker as he makes the second ascent of 'A Little Peculiar' weighing in at British 7b, featuring one of the hardest moves of its type in the world. We also get esoteric at Brimham Rocks with a desperate E7 On Sight by James McHaffie. Plus ground up action as Ben Bransby and James McHaffie tackle 'one of the meanest sections of climbing on grit anywhere' with 'National Acrobat' at Ramshaw Rocks. Plus the first ascent of 'French Duke' another last great problem at Earl's Crag by Jordan Buys. ??Plus more grit action from the Roaches and the first repeat of Reservoir Dogs by Gaz Parry since the crucial pebble came off...